S01 E10 | How to Avoid Plummeting Your Price

There’s a difference between what somebody has set aside in their budget for a solution to their problem and what the pain really costs them and what it’s worth to them to solve the problem.
In this episode you will get tech and technique to sell more and stress less. Here are the highlights of this episode…

Ask questions about the outcome they are really looking to achieve, because that outcome often has multiple solutions and those solutions can be paid for with different budgets.

Make sure I’m solving the real problem, not just that surface level problem.

People will find incredible ways to fund projects that they’re personally committed to.

When a prospect doesn’t really understand their own pain, then any investment will seem like too much. If there is no pain, then no amount of investment is worth it.

Understand how to use Excel or other spreadsheet applications to analyze your pricing.

Before you build anything, go out and test the market test whether or not anybody clicks on a particular price.

Use a profit prediction tool to help you understand the potential of various pricing models.

You need to set some numeric expectations with your clients. when you understand what their problem is and their pain and then you talk about how you’re going to help them solve that pain, and ask, “How are you going to quantify that that pain was solved?”

Smarter Sales Soundbites:
“There’s a difference between what somebody has set aside in their budget for this solution and what the pain really costs them or what it’s worth for them to solve.”

“We undersell our own solutions and go for that quick sale to our detriment.”

“Think from your clients perspective, are you really solving the real problem with this solution or are you leaving some aspect of the solution on the table because we’re afraid to ask for a certain amount of money?”

“The real sales solution is a combination of having your mindset it right, getting the mechanics of selling correct and also being in consistent motion.”

END_OF_DOCUMENT_TOKEN_TO_BE_REPLACED 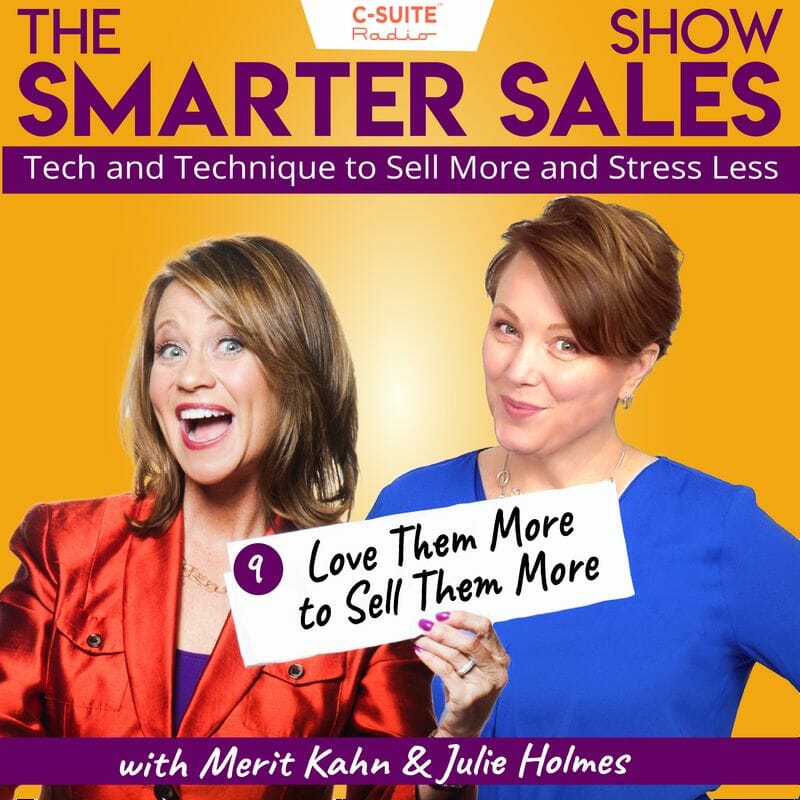 SHOWNOTES:
This episode is about how to find out what the pain is that people are willing to pay to fix. Learn what people really buy, the questions to ask them so that they discover for themselves they need what you have and some amazing tech tools to keep you organized and on track. In each episode of The Smarter Sales Show, you will get tech and technique to sell more and stress less. Here are the highlights of this episode…

Technique Tips from Merit:
·     The way that we buy impacts the way that we sell.
·     Ask questions so people discover for themselves that they have pain.
·     People make decisions intellectually, but they buy emotionally.
·      Say what you do in a way that hits those emotional hot buttons for them.
·     The multiplier question: Is this a onetime cost or do you pay this over and over and over again because this problem is still in place?
·
Technology Tips from Julie:
·     Tech enables us to capture both qualitative and quantitative evidence about pain.
·     Strategy 1: Do market research on social media to learn what people are complaining about.
·     Strategy 2: Ask Google what people are searching for to find solutions to problems.
·     Strategy 3: Survey your existing audience to help me understand which messages resonate and which pain they’re experiencing.
·     The big thing that tech can do is it can help you to find what people are talking about and the words that they want to hear.

Smarter Sales Soundbites:
“People will do more to to avoid pain than gain pleasure.”

“Take the things we find through tech like, here’s the top 10 reasons that people go and find this solution and then say, what we hear most often is that people are frustrated by this. Is that true for you?”

Referenced in this Episode:
Listen to what the market is saying about you and your competition.
Brand Mentions
Research what the market is searching for when it comes to your product, service or industry.
AnswerThePublic.com
Ask your market what matters to them.
Zoho Survey
Survey Monkey
Merit’s download: Pain Questions

END_OF_DOCUMENT_TOKEN_TO_BE_REPLACED 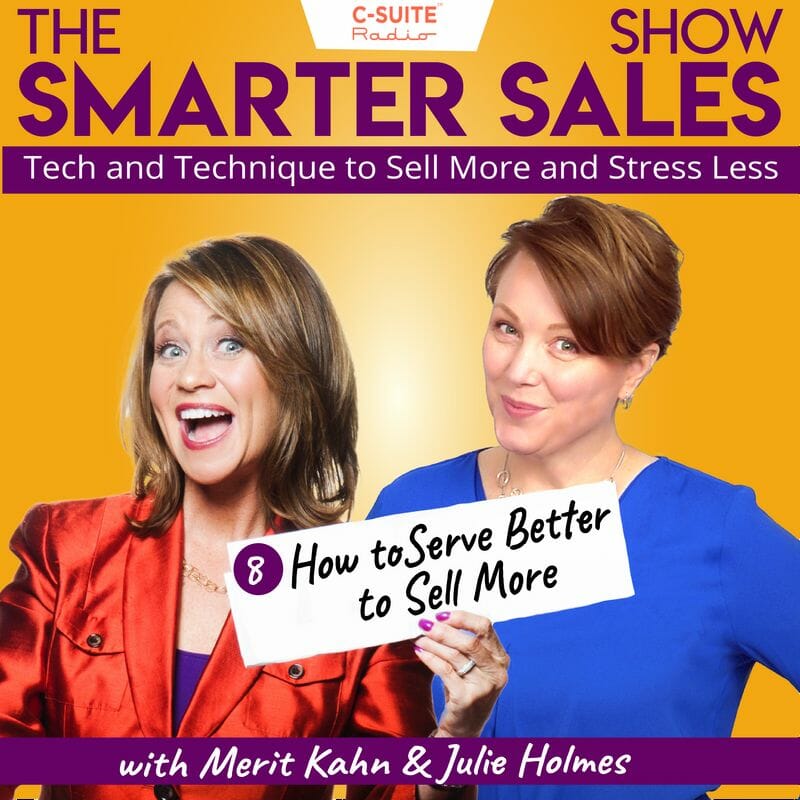 Like it or not, we are all in sales… so the question is how do you serve better in order to sell more? How do you grow the lifetime value of a client? You will love this episode because increasing existing business is the easiest way to grow. In each episode of The Smarter Sales Show, you will get tech and technique to sell more and stress less. Here are the highlights of this episode…

Serving clients well is really the key to growing sales.

To grow your businesses with existing clients, first solve the problem they hired you to fix and then upsell additional offerings.

If we’re not serving our clients, delivering on what we’ve initially promised, then there is nothing more they’re going to want to do with us.

You don’t get any extra credit until the original job is done.

Customers that have exceptional salespeople are ten to fifteen times more likely to remain loyal.

One of the challenges I would encourage everyone to take on is not only capturing what success looks like, but how will success be measured.

Capture metrics in your CRM system, Excel, GoogleDocs or Office.

If you don’t have your photo in your signature on your emails, go do that right now.

Do more video messages, incorporate your humor and your personality into those messages.

Smarter Sales Soundbites:
“I want to solve the problem that you hired me to solve. And then if you’re open to it, I would like to have two other conversations with you. One about who else you might know that I would be able to help in similar way and also what else you and I might do together to expand on the solution that is now in place and delivering the result that I promised.”
“70 percent of the time when a customer leaves an organization it is because they believe that they’ve had poor service and almost always that is attributed to the salesperson.”
“One of the things that every customer needs once they’ve joined you is reinforcement that they have made a good decision. They’ve got to demonstrate that success, not just for them, but for us as well.”
“Measure the indicators on the way to the results.”
“Good customer service is just an integral part of being a professional salesperson.”

END_OF_DOCUMENT_TOKEN_TO_BE_REPLACED 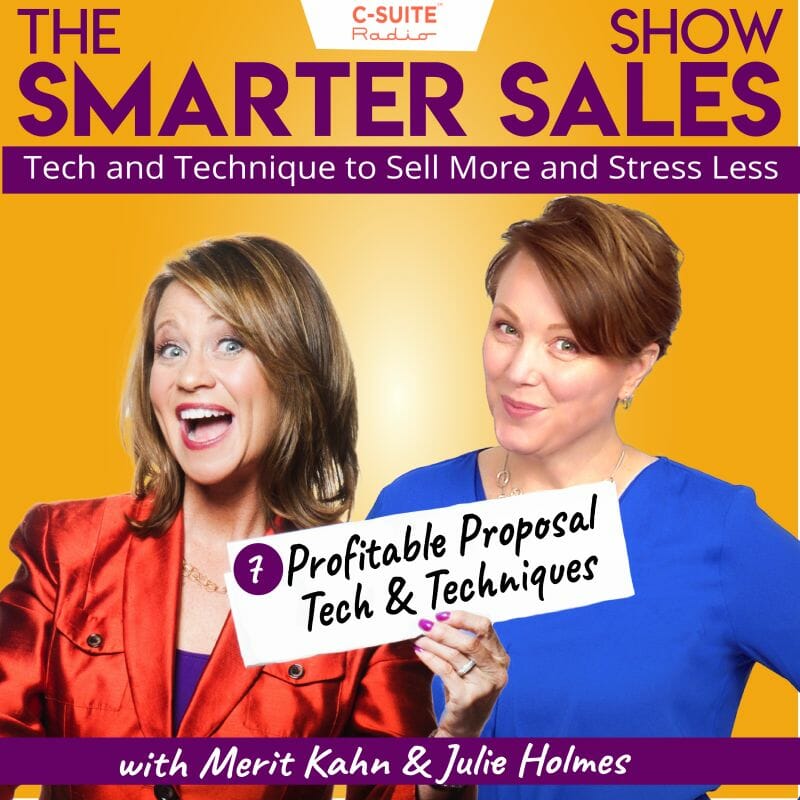 Whether you work with a standardized proposal or each one is a custom work of art, this episode is for you. You will learn about the technique to write your proposal and how to use tech to make customizing proposals easy and you can track them to so you know when it’s being considered.
How do you save time, use the right language, know when to send and track those proposals?

In each episode of The Smarter Sales Show, you will get tech and technique to sell more and stress less. Here are the highlights of this episode.
Technique Tips from Merit:

A proposal is my best guess at what I think you want. A working agreement is let’s have a discussion about what you really need and what you want, and then I’ll give you the good business reasons why there might be some other elements that you need to get to your outcome.

When they say, “put together a proposal…” Respond, “I’d be happy to, but Are you open to co-creating a working agreement so you get exactly what you need/want and it makes good business sense.”

There won’t be any surprises in the proposal, I’m just writing up what we discussed.

Proposals outline benefits, deliverables and costs. Make sure you’re also includes your prospect’s pain and review that before getting to the costs.

Recording sales conversations then use the exact language they articulated their problem in your proposal.

Use tech to track, expedite and make the proposal process more consistent.

Separate out the idea of the proposal from the contract, because those are two different stages of the sales cycle.

One of the first ways that we differentiate is by being beautiful. Don’t just word document proposals, do beautiful proposals using PowerPoint, PandaDoc or Proposify.

Reuse components of your proposals. So rather than crafting proposals from scratch, every time, decide the 10 different things that you typically sell and have a page for each.

Proposal technology platforms allow you to go straight from a proposal to a signature.

Being able to follow up on your proposal is one of the most critical things that you can do so you can call them when they are looking at your proposal and are ready to buy. I use DocSend which lets me see that they’ve opened it and I get notified every time somebody opens my proposal. But the other thing it does is it lets me see which pages of my proposal they spend the most time on.

Smarter Sales Soundbites:
“A lot of people rush to get to the proposal that they think is going to sell for them instead of really hang out a little bit more in that question and discovery, part of the sales process, to even discover whether or not this prospect really qualifies for the time and effort that they’re going to put into a proposal.”
“One of the challenges is making sure that we don’t use proposals as a crutch for selling. If I’m just measured on how many proposals did I get out the door, there’s no incentive for me to do the qualification step properly so that I’m maximizing the proposals that I do have out there.”
“There aren’t gonna be any surprises in what we discussed.”
“I don’t think I’m doing anybody any favors by taking my time to create a proposal that’s only based on guesswork.”

Make sure that you’re not creating proposals before qualifying prospects.

Use tech to track that proposal.

Referenced in this Episode:
Creating Proposals

Connect with us on LinkedIn…
Merit Kahn
Julie Holmes